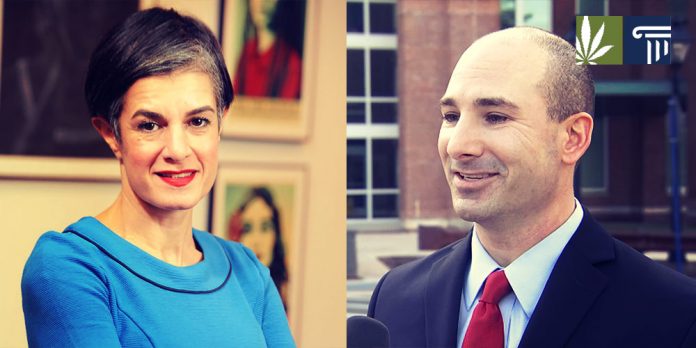 Two newly-elected Virginia prosecutors said they will not pursue low-level marijuana possession cases in their counties.

Descano and Dehgani-Tafti said prosecuting minor cannabis possession charges disproportionately impacts blacks and latinos, burdening them with convictions that harm their life prospects. They claimed such prosecutions do little to protect public safety, while occupying precious law enforcement resources which could be put to better use.

Descano, a former federal prosecutor who campaigned against mass incarceration and the war on drugs, argued for the importance of prosecutorial discretion with regards to marijuana charges.

“I did not come to this decision lightly,” Descano said in a press release. “This deliberate policy shift is a result of significant meetings, research, and thoughtful considerations. It’s based on a thorough look at our criminal justice system, downstream consequences, and most importantly our community.”

In a motion to dismiss from court three low-level marijuana possession charges, Dehgani-Tafti made similar points.

“In a world of limited resources, it is the Commonwealth’s position that these should be directed towards more serious felony offenses, towards offenses against people and their property, and towards investment in programs that demonstrably reduce recidivism,” the court filing read.

Descano and Dehgani-Tafti’s stance has already been met with resistance by some judges who say that such a blanket approach must be codified in the legislature, and that until then each case must be determined on its own merits according to existing law and practice.

In the case of one defendant, Jose Diaz, Simmons said he is wary of dropping all marijuana possession cases as a matter of blanket policy.

“In this court, everything is individualized,” Simmons said.

This is not the first time Virginia prosecutors and judges have clashed over low-level cannabis possession charges.

This prompted a coalition of judges to block Underwood’s efforts, saying he overstepped his authority. The dispute went all the way up to Virginia’s Supreme Court which sided with the judges. It was ruled that the judges have the power to accept or reject judicial directives from the commonwealth’s attorneys.

This ruling means that Descano is unlikely to present a further legal challenge to Judge Simmons’ decision to reject his blanket marijuana possession policy.

Fairfax County Police Department is also unlikely to change their approach to low-level marijuana possession cases. They said they have no plans to soften their enforcement procedures, while two Fairfax County police unions declined to comment on the issue.

Absent of any procedural changes to low-level marijuana possession, Descano and Dehgani-Tafti’s position demonstrates a growing weariness in Virginia towards law enforcement’s heavy-handed approach towards drugs.

But as the judges make clear, meaningful change in a state with some of the harshest marijuana laws in the country will only happen through legislative action.

Gov. Ralph Northam (D) ran on a decriminalization platform in 2017 and remains supportive, which seems more promising now the Democrats have gained control of both Houses.

The 2020 legislative session in Virginia is shaping up for change with two prefiled bills scheduled for debate- one to decriminalize and one to legalize marijuana. The state’s top prosecutor, Attorney General Mark Herring, is also eager to use the Democratic majority to push through marijuana reforms, having hosted a summit last month to develop a plan for decriminalization, and take steps towards a legal, regulated adult-use market.