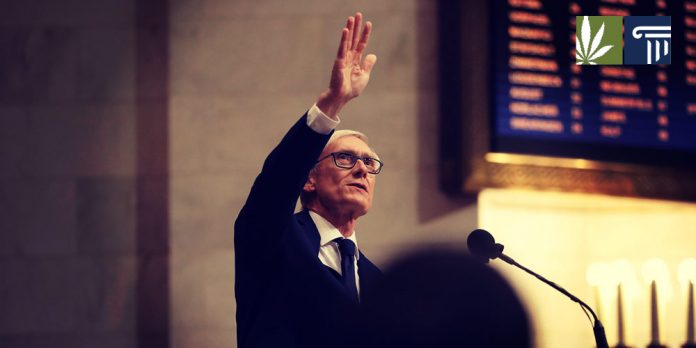 The pilot program began last year with 250 licenses issued to grow the versatile crop. In 2019, the number of farmers licensed and registered with the state Department of Agriculture, Trade, and Consumer Protection jumped to 1,247, with a further 556 licenses issued to hemp processors.

“I was proud to sign this collaborative, bipartisan bill into law today to ensure the continued success of our hemp program and the many new opportunities hemp provides to Wisconsin farmers,” Evers said in a statement.

Much of this success is built on a revival in hemp’s demand due to growth in the market for CBD, which is extracted from the cannabis plant and used to treat a variety of conditions with no intoxicating effects.

CBD is now in widespread use in oils, lotions and foods to, among others, relieve pain, ease anxiety and aid with sleep. Hemp itself is used for various products including rope, fabrics, lotions, as well as foods.

Though hemp still only captures a small share of the cash crop market in Wisconsin, farmers, investors and consumers alike are buoyed by its growth potential, given its demand and versatility.

One of the co-sponsors of the bill and a hemp farmer, Rep. Tony Kurtz, was present at the bill-signing ceremony in the offices of Gov. Evers alongside other lawmakers, hemp growers, processors, retailers and consumers of hemp products.

“This is still an emerging industry,” Kurtz said in a statement. “Still, I believe that Wisconsin can be a leader in hemp production.”

As well as permanently establishing Wisconsin’s hemp industry, the newly-signed bill aligns the sector with requirements laid out under the 2018 Farm Bill, which legalized hemp production nationwide.

Most of these changes are technical, such as permitting individuals to have a blood concentration of up to 0.03 percent THC, so that those who take CBD products with trace amounts of THC are not penalized. Wisconsin is now the seventh state to have passed laws containing such provisions.

Hemp is a variety of cannabis bred to contain 0.3 percent or less of THC, the psychoactive component of cannabis. Hemp grown with a greater concentration than this must be destroyed. This regulation is already proving contentious among farmers, and is only likely to become even more so as the industry grows.

While the hemp industry in Wisconsin goes from strength to strength, progress on broader marijuana reform remains stuck.

In spite of a majority of Wisconsinites supporting broad marijuana reform, and Gov. Evers putting his weight behind full cannabis legalization, Democrat lawmakers have run up against a brick wall in their attempts to legalize medical marijuana and decriminalize low-level marijuana possession.

Similarly, a bill to legalize adult-use recreational marijuana failed to get off the ground during the last legislative session.