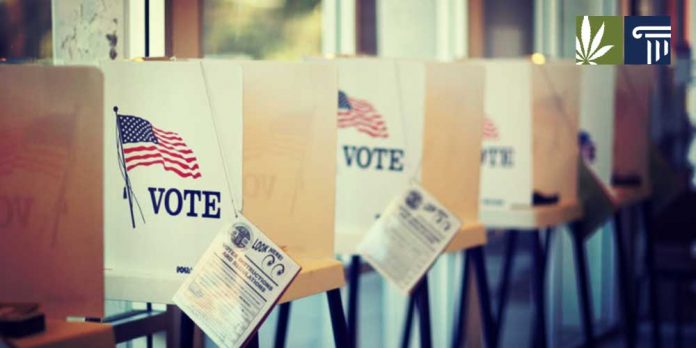 In the November 2018 election, solid majorities of Wisconsin’s voters—Republican and Democratic alike—approved nonbinding ballot questions on the legalization of medical and recreational marijuana.

A listing of the percentages conveys the strength of the support. The victory with the lowest margin was in Racine County, at 60%. In several counties, the yes vote was in the range of 80%, while in others the range of mid-60 to 70%. More than half of Wisconsin’s voters voted on a marijuana question, and a majority of them voiced support for some type of legalization. This number confirms a poll taken before the election that showed that 60% of Wisconsin voters—including Republicans at 62%—favor some type of legalization.

Adult use ballot questions were approved in five counties and one city.

In Dane County, of which liberal Madison is the central city, 76% of voters said yes to Question II, which asked: “Should marijuana be legalized, taxed and regulated in the same manner as alcohol for adults 21 years of age or older?”

In LaCrosse County, a similar question received a yes vote of 63%. The county voted 51% for Hillary Clinton in 2016.

Milwaukee County is also blue, and 70 percent voted yes on a similar question on whether marijuana should be legal for those 21 and over.

Rock County voted blue in 2016, and almost 70% of its voters said yes to the question: “Should cannabis be legalized for adult use, taxed and regulated like alcohol, with the proceeds from the taxes used for education, healthcare, and infrastructure?”

Racine county, in the southeastern part of the state, voted narrowly for Trump in 2016. In the county seat, Racine City, 66% of voters answered yes to the question: “Should cannabis be legalized for adult recreational use in Wisconsin?”

Those majorities may seem impressive, but as the result in Racine County indicates, they are paltry compared to the majorities in favor of medical legalization. For example, in Racine City, 88% of voters said yes to the question of whether medical cannabis should be legal. Questions on that issue were on the ballot in 11 of the state’s 72 counties. In Brown County, 76 percent said yes to legalizing medical cannabis. In Forest County, which went almost 62% for Trump in 2016, 79% said yes to medical cannabis. In Kenosha County, 88% said yes to allowing access to medical cannabis to those with “debilitating medical conditions.” In Lincoln County, 81% approved a similar question. Similar percentages said yes to similar questions in Marathon, Marquette, Portage, Racine, and Sauk Counties. In addition, in the city of Waukesha, the question before voters was “Should cannabis be legalized in Wisconsin for medicinal purposes, and regulated in the same manner as other prescription drugs?” 77% said yes.

The November 2018 election in Wisconsin makes it very clear that a solid majority of the state’s voters, including Republicans, approve of legalization, especially medical legalization. How the legislature will respond remains to be seen.